During the weekend of September 5-7, 2014, Santa Fe’s biggest celebration begins; a celebration over 300 years old.

Santa Fe, New Mexico is a historic capital and one of the oldest in the United States. It was established by Don Juan de Onate at San Gabriel in 1598 and moved over 30 miles south to the foot of the Sangre de Cristo Mountains, where Santa Fe was founded in 1610.

In 1680 the Indians revolted, burned the city and drove out the Spanish colonists, who fled to what is now Juarez, Mexico. Before fleeing, the Spanish colonists rescued from the burning church the 29-inch wood carved Marian statue, La Conquistadora, originally brought to Santa Fe in 1625 by the missionary, Fray Alonso de Benavides.

Twelve years late, the King of Spain appointed Don Diego De Vargas to join the other colonists in Guadalupe del Pasa and organize a campaign for the resettlement of Santa Fe.

He accomplished this difficult and remarkable mission without bloodshed on September 4, 1692.

In December of the next year, the Indians resisted when De Vargas returned from a trip to recruit more colonists, so he set-up an encampment outside the city near the present site of the Rosario Chapel. De Vargas placed La Conquistadora on a makeshift altar and implored her to intercede for the successful re-entry into the town. 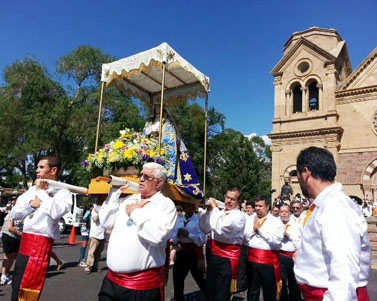 Before the end of December 1963, De Vargas had led his triumphant forces back into the City of Holy Faith where La Conquistadora was likely enshrined temporality in the Palace chapel.

Crediting the Madonna’s intercession with his victory, De Vargas is said to have vowed restoration of her throne in the parish church built by Fray Benavides in 1692 and destroyed by the Indians in 1680. Unfortunately, De Vargas died on April 4, 1704 without achieving this goal.

La Conquistadora is among the most venerated Marian figures in the world. She was crowned in 1954 by Cardinal Francis Spellman and again in 1960 by an apostolic representative of Pope John XXIII. Her golden crown is studded with precious stones, including a three-carat diamond.

And so it is that La Conquistadora, a conqueror of hearts, and De Vargas, a conquistador of the new world, join forces to inspire our unique and enduring celebration, la Fiesta de Santa Fe, a time of prayer, rejoicing and hospitality for all.

And so today, Fiesta de Santa Fe is an annual festival to honor and preserve Santa Fe’s rich history. “The cry of “Viva la Fiesta” has been reverberating through the streets of Old Santa Fe every autumn for 301 years, and the sound generates a curious blend of thanksgiving, revelry and pride in the hearts of Santa Feans who celebrate Fiesta annually to commemorate Don Diego De Vargas’ peaceful reoccupation of the City of Holy Faith.”

Thank you to SantaFeFiesta.org for the incredible history. 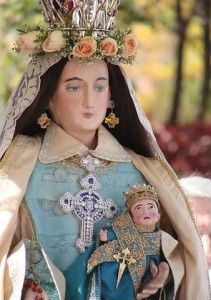 Live like a Santa Fe local with the perfect Santa Fe vacation rental from Adobe Destinations by Proctor Property Management. Be a part of the history, romance and intrigue that has made Santa Fe famous! We are one of the oldest firms in Santa Fe specializing in exclusive short term Santa Fe vacation rentals. Adobe Destinations offers a comprehensive inventory of Santa Fe Vacation Home Rentals with views of the mountains or sunsets, you need not look any further. We will provide you with a variety of Santa Fe Vacation Rental properties to accommodate your taste, location and budget. In addition to our experienced and friendly staff, we offer a concierge service to assist you with your needs while in Santa Fe. Whether you want your refrigerator stocked, firewood delivered or simply need recommendations to our world class restaurants, for a nominal fee, our concierge service will make your stay a memorable one. Anytime is a good time to visit Santa Fe, NM which celebrates 400 years of rich history and cultural diversity. Santa Fe is consistently rated as one of the top vacation destinations by travelers in the U.S. Come enjoy the peace and quiet, cultural arts, exceptional cuisine, and beautiful landscape that Santa Fe offers! Our number one goal is to enrich your visit to Santa Fe from opening the door to your home to assuring the superior customer service we are known for; we look forward to your stay with us in our beautiful Santa Fe New Mexico Vacation Home Rentals.
View all posts by adestinations →
This entry was posted in Uncategorized and tagged City of Holy Faith, don diego de vargas, fiesta de santa fe, History of Santa Fe, New Mexico, Santa Fe, Santa Fe Festivals, Santa Fe History, What is the meaning of Fiesta de Santa Fe?. Bookmark the permalink.